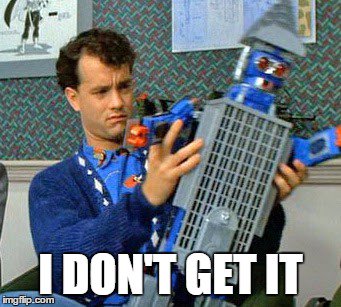 So many businesses struggle with trying to outdo their competition. They try all kinds of things. They match their competitor’s product and then add some extra bling or make it a little bigger or smaller. They get focus groups together or send out surveys. They look at all the data. However, they most often fail to do one thing. Use the product or try the service out themselves – in real life, not some laboratory.

I am reminded of the 1988 movie Big starring Tom Hanks. In the film Hanks plays the character of a little boy who makes a wish to be big, like an adult, but doesn’t have the forethought to also request having an adult behavioral maturity (not necessarily a bad thing). Thus, he is essentially a kid in an adult body.

Over the course of his indoctrination to adulthood, he finds he needs a job. Through a series of events he lands a job working for a toy company – naturally. In one particular scene, Hanks’ character, Josh, is in a meeting where the executive committee is reviewing new products. The executives discuss all the data, revenue projections, profit margins, etc. ad nauseam. As they talk, Hanks (Josh) gets down and begins playing with one specific toy, a large building that transforms into a robot. As the meaningless business jabbering continues, Josh finally looks up and says…

EXECUTIVE: What, exactly, don’t you get?

JOSH: It turns from a building into a robot. Right?

JOSH: Well, what’s fun about that?

EXECUTIVE: Well, if you had read your industry breakdown, you would see that our success in the action figure area has climbed from 27% to 45% in the last two years. There. That might help.

EXECUTIVE: What? What don’t you get, Josh?

JOSH: There’s a million robots that turn into something. This is a building that turns into a robot. What’s fun about playing with a building? That’s not any fun.

EXECUTIVE: This is a skyscraper.

JOSH: Yeah. A prehistoric insect with claws that could pick up a car.

And so it goes. Josh becomes the hero with the great idea, but it’s not an uninformed idea, it’s an idea that comes from a unique perspective, the customer’s perspective. Josh, a big kid, knows full well what he’s talking about because he plays with toys. So, when is the last time you played with your company’s offering? What is really great about it? What really sucks about it?

Not long ago, Apple came out touting its newest iPhone, and what do I remember about it? One version has a bigger screen, of course that means the whole thing is bigger, which, as a customer, is something I, a customer, DO NOT WANT. I don’t want a bigger phone, bigger screen or not, the current one is uncomfortable enough to carry.

I guess, like Josh, I have to say, “I don’t get it.” When I talk to people about their phones, the biggest pain point is either it is too big …or… it can break. Hey, Apple or any of the other phone folks, have you actually used your phones? Have you ever dropped one? Have you ever had to deal with that cracked screen for months while you decide whether to get a new one you can’t afford or to go through the hassle of finding someone to fix it and put you out of over a hundred dollars or so? How about making a phone that I can drop and it doesn’t break? How about a phone that I don’t need to go out and purchase an expensive case for to give me a somewhat decent chance of walking away from an accident unscathed?

Forgive the rant but that’s just one case of companies missing the forest for the trees. Imagine if the CEO of Verizon or Comcast had to call their call center and sit through the ridiculous maze of getting an answer. I can only think they would make changes immediately.

Here’s the point. If you want your business to make a difference, to stand out, to outdo your competitors, go out and use your product or service. And don’t find reasons to avoid the truth. Don’t make excuses, don’t cop out due to costliness, and do not, I repeat, do not think it is good enough, this is the surefire way to become yesterday’s news. Instead, be honest, if it sucks, say so and then commit to fixing it, make it right, make it something you would be proud to put your signature on.

There, the simplest way to outdo your competition, USE YOUR PRODUCT and make it the best because you have touched it and felt the pain.